Welcome to this week’s Tip of the Hat! This week marks two important dates. The first date is this Tuesday! Data Privacy Day is a worldwide event to raise awareness as well as promote data privacy practices. Some last-minute ideas to celebrate #DataPrivacyDay at your library can include:

The second date marks the first anniversary of LDH Consulting Services! We launched at Midwinter 2019, aiming to provide libraries and library vendors guidance on all things library data privacy. It’s been a busy year getting the word out at our first ALA Annual, as well as word of mouth and this newsletter. This first year saw many training sessions, legislation reviews, and even a guest lecture or two! Thank you to everyone – our clients, supporters, newsletter subscribers – for helping LDH through the first year. We hope to serve the library and vendor community in protecting patron privacy for years to come.

Speaking of serving – LDH is still accepting projects and clients for Summer and Fall of 2020. We have a variety of training offerings for staff, including data lifecycle management, vendors and privacy, privacy impact assessments, and implementing privacy at your organization. LDH can also help you keep track of developing data privacy regulations in your state! With California’s new data privacy law in effect, many other states are looking to implement similar laws that can impact how libraries do business with vendors concerning patron privacy. If your organization needs that initial push in adopting best privacy practices or a review of existing privacy policies and practices, LDH is more than ready to help with that push.

The majority of our clients come to LDH through word of mouth, so we appreciate you all telling your colleagues about LDH and our services!

Welcome to this week’s Tip of the Hat! Are you prepared for ALA Midwinter in Philadelphia this week? If not, you’re not alone. LDH is ready to help you get the most out of #alamw20!

Here are some reminders as to how to protect your privacy while traveling and conferencing:

VPN? Check. AC wall charger or power bank for the phone? Check. Mental reminder to take off the conference badge outside of conference spaces? Check!

In the Exhibit Hall

Booth #1823 – Stop by and get a sneak peak of the upcoming Privacy Field Guides! These guides cover a variety of topics, including privacy audits and the data lifecycle.
Booth #864 – The Library Freedom Project will be answering any questions about the Institute (applications due February 10th) as well as handing out resources about protecting privacy at your library and community.

Sunday, January 26th seems to be the day for privacy at Midwinter:

Data and Diversity: Navigating the Ethics of Demographic Data in Inclusive Community Collections; 1:00 PM – 2:00 PM; Room 203-AB
Abstract: Librarians building local collections want to represent the diversity of their communities. When we use information about people’s identities to assess a collection’s inclusivity, how do we protect people’s privacy and respect their autonomy? We’ll discuss how we addressed these questions for local digital music collections at public libraries in Seattle and beyond.

We’ll share best practices we created, how we developed those practices, and how we continue to adapt them. We present our work with community data as a template for engaging with the complex and evolving issues facing librarians in an era of rapid technological and societal change.

LITA Top Tech Trends; 1:00 PM – 2:00 PM; Room 122-A
LITA’s Top Tech Trends is always a popular event, and privacy and security will most likely make their way into the panel discussion.

Data Abuse: Is There a Sustainable Solution to Help Notify Users of Egregious Data Abuses?; 4:00 PM – 5:00 PM; Room 204-C
Abstract: How can patrons easily understand the extent of data collection that results from their use of electronic resources? Often, the resource provider just wants to confirm a patron’s institutional affiliation, but some vendors require that users create an account, subscribe to a newsletter, or provide demographic information. At Cornell University Library, staff are exploring options for helping patrons easily understand data collection from electronic resources – a system that can be supported, shared, and used by all. In this discussion, we will explore our ideas so far, and seek input on how to make such a service sustainable.

LDH will not be at Midwinter this year, but we plan to be at Annual in Chicago. We hope to catch you then! In the meantime, safe travels to Philly, and enjoy all the privacy offerings Midwinter has to offer.

In the book, Zuboff provides some context to the questions:

Zuboff offers answers to these three questions in her book: “As things currently stand, it is the surveillance capitalist corporations that know. It is the market form that decides. It is the competitive struggle among surveillance capitalists that decides who decides.” While the current prognosis is grim according to Zuboff’s analysis, the three questions are a powerful tool in which one can discover the underlying power structures of a particular organization or culture.

An interesting thought exercise involves applying these three questions to the library. On a lower level, the data lifecycle provides some answers to “Who knows?” concerning access to patron data as well as the publication and disclosure of data in reports, data sets, and so on to third parties. The “Who decides?” question goes beyond the data lifecycle and ventures into the realm of data governance, where decisions as to who decides the data practices of the library are made. However, the answer goes beyond data governance. Library use of third-party tools and services in collecting or processing patron data bring these third parties into the realm of “Who knows?” as well as “Who decides?” The third-party can adjust their tools or products according to what best serves their bottom line, as well as providing a tool or product that they can market to libraries. Third parties decide what products to put out to the market, and libraries decide which products meet their needs. Both parties share authority, which leads this thought experiment closer to Zuboff’s analysis of the market as the decider.

That brings us to the third question, “Who decides who decides?” Again, our thought experiment starts to blend in with Zuboff’s answer to the same question. There is indeed a struggle between vendors competing in a niche market that has limited funds. We would be remiss, though, if we just left our analysis pointing to competition between third parties in the market. Part of what is driving the marketplace and the tools and services offered within are libraries themselves. Libraries are pressured to provide data for assessment and outcomes to those who directly influence budgets and resources. Libraries also see themselves as direct competitors to Google, Amazon, and other commercial companies that openly engage in surveillance capitalism. Instead of rejecting the methods used by these companies, libraries have to some extent adopted the practices of these perceived market competitors to keep patron using library services. A library on this path could find themselves upholding surveillance capitalism’s grasp in patrons’ lives.

Fitting this thought experiment into one newsletter does not give the questions the full attention they deserve, but this gives us a place to start thinking about how the library shares some of the same traits and qualities found in surveillance capitalism. Data from patron activities can provide valuable insight into patron behaviors, creating personalized library services where yet more data can be collected and analyzed for marketing purposes. It’s no surprise that data analytics and customer relationship management systems have taken off in the library market in recent years – libraries believe that there is a power that comes with these tools that otherwise wouldn’t be accessible through other means. Nonetheless, that belief is influenced by surveillance capitalists.

Decided for yourself – give Zuboff’s book a read (or listen for the audiobook) and use the three questions as a starting point for when you investigate your library’s role in the data economy.

A new year brings New Year resolutions. If you resolved to adopt better privacy practices and tools, you’re in luck! This week’s newsletter continues our exploration of the Privacy Tech Toolkit with the Tor browser and network.

Tor enables users to anonymously browse and communicate online through two main parts. The first part is the Tor network, a worldwide network of servers. These servers serve as relays, sending encrypted information to randomly selected relays, masking the location of the user of the network. “Tor” stands for “the onion network” because this relay process resembles layers of an onion – each relay decrypts one layer of encryption and sends the rest off to the next relay for the next round of decryption. This routing masks both the source and destination locations of the online traffic. This is similar to a VPN in such that you can hide your actual location. The Electronic Freedom Foundation illustrates how the Tor network works with the following illustrations: 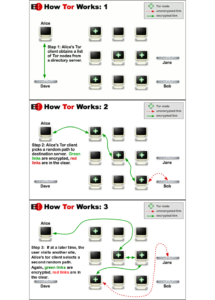 End-users can access the Tor network with the Tor browser. The browser is based on Firefox and comes with the NoScript plugin already installed. You can install the Tor Browser on all major operating systems as well as install the browser on a USB stick or SD card for when you are traveling or won’t have access to your computer.

Instead of accessing the internet through a single private network in the case of a VPN, Tor uses a distributed relay network that shifts your “location” every time you connect to the network. Tor is open source and is free to the public, but there are some considerations when choosing to use Tor for online browsing and communications:

Several libraries are going beyond offering Tor access to public computers by becoming a relay, increasing the Tor network’s capacity to meet user demand. The Kilton Public Library in New Hampshire was the first public library in the US to host a Tor relay as part of the Library Freedom Project’s Tor Exit Relay Project. The project was not without controversy, but in the end, the public library was allowed to keep the relay.

If you need an anonymous way to browse the internet, Tor is one of your best bets. While some people opt to use both Tor and a VPN at the same time for additional security and privacy, most use one or the other when they need to have a private and secure way to browse and communicate online. Again, each tool has its strengths and weaknesses in protecting your privacy and choosing which one to use depends on your situation. Tor and VPNs are widely known tools, but there are many other tools to cover in our Privacy Tech Toolkit – stay tuned!

Thanks to subscriber Kristin Briney for the topic suggestion!

Tip of the Hat Archives